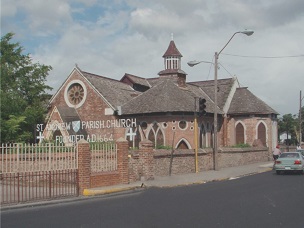 The St. Andrew Parish Church
Diocese of Jamaica and the Cayman Islands

Photo/Illustration of Church
A painting by Heather Sutherland-Wade

St. Andrew Parish Church was founded in 1664 and is one of the oldest churches in the country. It was founded some four years after Britain established civil administration following conquest of the island from Spain. It is named after the apostle Andrew, the patron saint of Scotland.

Until the disestablishment of the Anglican Church in 1870, St. Andrew Parish Church was the only Anglican church in the parish and had therefore a responsibility for the spiritual welfare of the parishioners. This was not easy but the Church established several mission stations before and after the disestablishment. Many of them are now separate congregations.

The first two church buildings were constructed some distance away from the current site but these were destroyed. The structure on the site of the present church was completed in 1700. This building was extensively renovated and enlarged in 1879 and since then several additions have been made. This was necessary because of a growing congregation as well as the damaging effects of hurricanes and earthquakes. In 1974, a Church Office was constructed to house offices and a conference room.

The Church has some of the oldest and beautiful monuments and memorials of any Church in Jamaica. Stained glass windows, installed after 1879, are an important part of the memorials of the church. The present organ, the fourth in the church’s history, was installed in 1978. The cemetery is one of the oldest in continuous use in the country and many prominent persons associated with the history of are interred within its boundaries.

The first Rector of St. Andrew’s was Rev. James Zellers, a Swiss Clergyman who served from 1664 to 1700. From 1664 to the present time the Church has had 20 Rectors. The first baptismal record is dated July 24, 1664. The first oratorio to be composed in the New World was “Jonah” by Samuel Felsted an organist at this church in the latter part of the 18th century Buried in the cemetery is the first Bishop of Jamaica, the Rt. Rev Christopher Lipscomb, Also buried are Archbishop Enos Nuttall, Rt. Rev. P.W. Gibson, Rt. Rev. Cyril Swaby.

Books and articles on the history of the Church include: